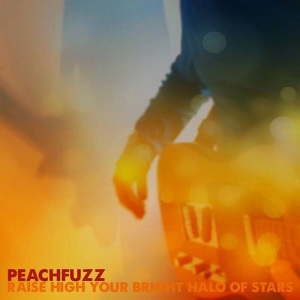 This is the third full length release from Peachfuzz, one of a few bands who aren’t ashamed to admit their power pop roots, all be it the classier end, comprising of Teenage Fan Club and Big Star. They certainly appeal to us with their desire to blend power pop, nineties alternative and classic rock n roll.

As soon as we heard opening number “Something’s Wrong” our first thought was Cheap Trick! There’s a hint of Robin Zander in the vocal delivery and the chugging guitar and pop riff is definitely Cheap Trick. That comparison is kept going with “Nobody Else” which is just a brilliant, catchy song.

Songs like “Living With Defeat” and “On Your Own” are the sort of songs that us Brits imagine are blasting out of US AM radio all across the states (or at least we hope so!). They are certainly designed for playing in open top cars whilst driving in the warm sunshine.

“Here She Comes” is more of a big eighties power ballad which would’ve been a global smash if recorded by a hair band, back in the day. If we’re honest we prefer the glitter punk of the brilliant “Over Me” and “Next Year” which have the perfect mix of grit and melody. The band seem to have been intent on delivering a set of songs that will instantly lodge in your brain. “Highest Window” has a Californian feel that will have you dreaming of a carefree existence of music, beer and BBQs.

There was a time when this type of music, which is really just brilliant power pop with an extra punk rock crunch, received far more exposure and air play. The Cheap Trick comparison is an easy one to make, but if you’re going to be compared to someone, it might as well be the best! If you’re a fan of them or if bands like Marvelous 3, The Crash Moderns or The Fags ring a bell with you, then you should definitely check this album out. Alternatively if you’re a ‘too cool for school’ indie kid then you should note that the Foo Fighters have been peddling this type of stuff, with extra ‘metal’ guitars and screaming vocals for years!!!