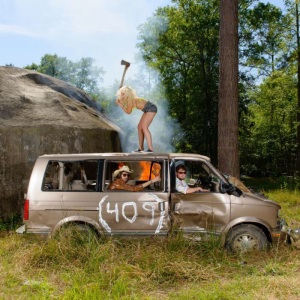 Purple are a Texan three piece and it’s fair to say they come across as a group of trendy young things who are destined to at least be hyped as the big new thing. This album is actually their debut which comes as a bit of a surprise given its undoubted quality. It can therefore only be assumed that this has been built up by some solid tour work, indeed they have recently supported the Subways over here in the UK.
They use the neat trick of using an intro with a hint of ‘Purple Haze’ to start the first song “Wallflower”. The track itself is a really rocky number which has a kind of alternative sound, a bit like Janes Addiction. A feeling which is kept going with a slightly looser rock n roll feel on “Double Nickels”. The band then add a bit of additional funks and beats in to the mix on “Leche Loco” to give it an almost grungy Beastie Boys feel. It’s a bit off beat but also has the sense of a song that will be an intense live favourite.

We are then thrown a bit of a curve ball with “Beach Buddy” which has a far more gentle and easy, almost laid back feel to it. It is surely the one that the record label heard and thought “that’s the hit”! In contrast, “Thirteen” is all teenage shouty angst destined to be played especially loud to irritate parents. Whilst “Target” acts almost like a blend and mix of the two different styles demonstrated by the songs preceding it.
They go back to their achingly cool sound on “Head On The Floor”, where it’s an indie dance floor favourite disguised behind the grunge and feedback. There is a more ‘atmospheric’ feel to “New Born” as it builds up a sense of anticipation until we hit the final song, “DMT”. That last song brings a raucous and ferocious end to the album. You can only assume it will be a live set closer with the band leaving the stage to a cry of feedback, a trail of smashed instruments and the gasp of a sweaty crowd.

Purple have managed to capture the feel, sound and, god damn it, almost the smell of youth. It’s passionate, vibrant, enthusiastic and, on occasions, even just a bit annoying. That’s a positive annoying though…. It has the sound of an album that will be played to death by its fans with the accompanying cry of ‘turn that music down’ coming from their parents. The fact is, in this day and age of run of the mill indie releases this is the type of sound and reaction far more bands should be trying to achieve! 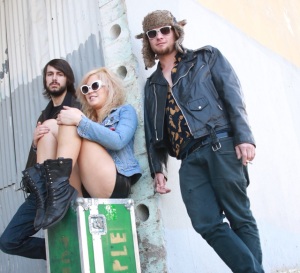