Looking for Johnny: The Legend of Johnny Thunders 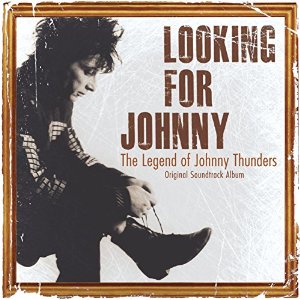 Anyone who is fan of cool rock n roll must surely know the name Johnny Thunders. Like many of the great rock n rollers he is another one who died far too young but left behind enough music and myths to inspire future generations of rockers. Like many it was a life full of tragedy but also moments of inspired brilliance. Finally in the form of this DVD we get the chance to not only learn about the legend, but also discover the real Johnny Thunders.
From the moment you put the DVD on you get the song “Endless Party” playing and it’s an instant reminder of the great man’s music and really puts you in the mood to watch the film. We also get an opening quote from Mr Thunders himself which really sums up his tragic life: “So many people think they know what I am, what I’m trying to do..nobody knows what I am, what I want to be, what I want to say, no one really listens”.
The film is absolutely full of quotes from both some of the great names in rock n roll but more importantly also from those who really knew Johnny. The list of greats includes Sylvan Sylvain, Walter Lure, Sami Yafa, Terry Chimes, Casino Steel and Nina Antonia (whose biography of Johnny Thunders you must also read when you have seen this film). The film is just loaded with choice quotes, one of the best coming from Sylvan Sylvain who describes Johnny a “The best songwriter that ever lived” which is some claim. He is not alone in this opinion though and one of the best things about this film is that it doesn’t purely focus on the tragedy and the drugs (although clearly they play a big part). Plenty of time is also given to really showing what a tremendous song writer and show man Johnny was. It is full of superlatives that are used to describe him, including: magnetic, passionate, an entertainer and the real deal.

The film really covers his entire life and we learn that even his childhood was clouded by sadness due to the split between his mum and dad and the clear void that was left when his father stepped out of his life. Having been a keen and talented baseball player it wasn’t long until he was sucked in to the rock n roll life, as he was seduced by the music of bands like MC5, The Stooges, The Stones, T Rex Etc. Then we get to learn about the creation of the wonderful New York Dolls (although they were originally just “The Dolls”). It is great to see early footage of the band and also learn how they attracted the wildest, unique and outrageous crowds that New York had ever seen. It’s also strangely gratifying to learn that it was the good old UK that first really ‘got’ the Dolls, although something of a surprise to learn one of their first visits to the UK was supporting Rod Stewart at Wembley!!
Despite the huge respect and acknowledgement paid to the New York Dolls now, at the time success and adulation wasn’t that easy to find. They were also struck by tragedy with the death of Billy Murcia way back in 1972, at the tender age of 21. It’s amazing how the band struggled and the generally poor reception their albums received. It is not so shocking to learn of the issues that their increased appetite for drugs had upon their career. It saw the management falling apart, being dropped by their label, no shows, and visits to rehab. Eventually Malcom McLaren arrives to put the final nail in their coffin with his misguided directing of the band into Red Patent Leather and communists overtones….Too Much Too Soon indeed!!

One of the other constant themes throughout the film is the strong relationship and bond that existed between Johnny and Jerry Nolan in particular. It was those two who, after The Dolls, went on to form The Heartbreakers along with Richard Hell and initially Billy Rath. Again they flourished in the UK where they joined the punk scene of the Sex Pistols, The Clash etc. and the notorious Filth & Fury tour. Songs like Born To Lose and Chinese Rocks, whilst showing the band’s sense of style they also did nothing to hide their junkie image and heroin problems. As usual nothing was smooth running as the films shows, that whilst they had the songs the album ended up being haunted with production problems. In fact they were so great that it actually resulted in Jerry quitting because of it. One thing we also learn is that despite all the issues, Mr Thunders remained resilient and even went on to then release “So Alone” an album that he actually describes as “The best record I’ve ever done”.
The film does a good job of balancing the joy with the pathos as the above artistic peak is then followed with some quite tragic images from a show in Sweden where Johnny is frankly just a complete mess and results shortly after in arrests and the cancellation of the tour. Yet still Thunders keeps looking for inspiration, and happiness?, and we see how he moved to France and somehow even ends up in a couple of French films. However, the problems still haunt him as we see how loneliness in France and in particular being separated from his kids leads to a life seemingly just based around scoring.

It’s his musical style and genius which comes to the rescue again with the heartfelt acoustic album “Hurt Me” being released. The film includes a great live clip of the classic “You Can’t Put Your Arms Around A Memory “being shown. One of the best features of this film is obviously the great music and there are some really great live snippets which show him both at his best and most chaotic, arguably sometimes at the same time!
Throughout the film Johnny and Jerry’s paths seem to intertwine and it shows how much they really needed each other. They come across as being true brothers who had loads of ups and certainly more than their fair share of downs. The film is an honest reflection of life with Johnny and one thing that is very clear is that living with him was anything but a bed of roses. It doesn’t flinch from showing the less sympathetic side such as when he left his pregnant wife, who he had mistreated as well, and his kids. Perhaps linked to his experience with his own father, the absence of his children in his life seemed to really push him further into the drugs and there is a telling quote where they talk about him searching for the never ending love that only a child can give.

Along with the sadness we also get some of the myths and stories that are so essential to really take a rock star in to legend territory. There is a great story of how the last time Jerry actually saw him before his death they shook hands goodbye at the exact place where they first met and formed the New York Dolls. His untimely death at the age of 38 also has the necessary air of mystery about it. It is surrounded with the stories of him being led away to be pumped full of drugs and all his possessions being stolen but the police refusing to investigate. The coroner’s report, however, suggests it wasn’t the expected OD but instead Lymphatic Leukaemia. This less rock n roll death is certainly supported by the emotional interviews in this film which discuss his really poor physical state in the weeks leading up to his death. Yet again these interviews produce some really poignant quotes including the very apt “He wasn’t capable of being happy, and he really, really wanted to be”.. Very true and also tragic.
Again, however, the film constantly reminds the viewer that you shouldn’t forget his music and the respect for his ability that so many held. Indeed, even Bob Dylan had wished he wrote “You Can’t Put Your Arms Around A Memory”. Like the man himself, the film is passionate, raw, honest and has an overriding sense of inevitable tragedy. He was a man who was loved by his friends and fans but sadly seemed to indeed be born to lose. It wasn’t, however, a life without purpose as not only has it resulted in this documentary but has also left a great rock n roll icon and a wonderful musical legacy.