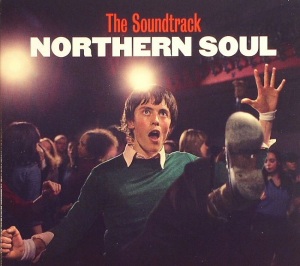 Northern Soul is one of those genres which is known for having such great music, but the question is always ‘where do I start’? Sure, we’ve all picked up one of the many ‘greatest ever Northern Soul’ compilations but it’s always been with the fear that it’s really just some record label chucking any Northern Soul related track they own on to one CD! Thankfully, this album may indeed be the go to album for those looking to learn more about this scene. It’s the soundtrack to the film “Northern Soul” directed by Elaine Constantine, which has gone from being a small film with independent releases to capturing the public imagination and resulting in a nationwide release and considerable mainstream press interest.
This com
pilation actually consists of two discs, with one being the soundtrack and the other entitled “More Inspiration”. There are fifty four tracks on the album, so we don’t have the space, or indeed the necessary vocabulary, to describe all of them. Our advice would be just to buy it and discover your own many favourite tracks.
The discs do include some names that will already be well known to all music fans and not just those already initiated into Northern Soul. This includes the likes of Edwin Starr (with the brilliant “Back Street”), Franki Valli & The Four Seasons (“The Night”) and the wonderful Marvin Gaye (“This Love Started This Heart Of Mine”).

The real joy, however, will come from finding so many great new songs and artists that you will immediately love. Many of whom may well be Northern Soul legends that are already adored by their dedicated followers. The great music really keeps coming, right from the opening number “Right Track” by Billy Butler which will instantly put you in the right mood to listen to all the other tracks. It is really just the first of many brilliant tracks that feature throughout the compilation. A special mention needs to go to a few, including “Soul Time” by Shirley Ellis which adds an almost disco feel to the soul, whilst “(Just Say) You’re wanted And Needed” is a wonderful, old school soul track. Then you have the purring richness of Don Varner’s voice on “Tear Stained Face”. Mainly though, songs like “In Love” by Tony Galla are just made for dancing to. If you can listen to records like “I Really Love You” by Jimmy Burns or “Love Factory” by Eloise Laws without moving then you need to check your pulse and make sure you are still alive!
The only conclusion needed for this album is just go out and get the CD, clear some space in your living room and recreate your own Wigan Casino with a big smile on your face!