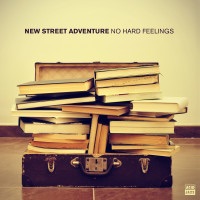 New Street Adventure are a London based band who are described as “blending social commentary nous, anthemic swell and underground grit to deliver their new wave soul sound”. They take their influences from people like Curtis Mayfield, Bobby Womack and Smokey Robinson but there is also a hint of more contemporary indie acts such as The Black Keys and even recent Artic Monkeys.
The album opens up with a reggae feel to “On Our Own Doorstep” and it immediately shows that New Street Adventure have an eye for social commentary, but thankfully not delivered in a heavy handed way. “Keep it Burning” has a much smoother soul feel on a lovely relaxed and gentle sounding track. Then “A Little Alarmed” mixes up the laid back vocals with a funky vibe which is almost like an eighties soul disco track. The soul continues on “Hunted” which is like an old soul ballad but with the usual lovey dovey lyrics replaced with something far more stark and haunting.

Whilst they add a more rock n roll feel to “Be Somebody”, it still seems to be built on a Northern Soul favourite. Again, it provides some clever lyrics which express some of the hassles which impact on the everyday man in today’s world. The band return to a great pop soul sound on “No Hard Feelings”, a song you could easily see being picked up by Craig Charles on his 6 music funk and soul show. The same could be said for “Foot In The Door” which sees that disco beat back and is a song you sense Nile Rodgers would love to be involved in.
The band do manage to slow things down on tracks such as “The Crunch” and “Say Your Lonely” which are pull at the heart string ballads. On the whole though, the album consists of songs like “She’s An Attraction “which seem to be made to get you up and dancing. Not surprisingly, this track is a simple pop soul song with an instant attraction! It is also no surprise that the album ends with another upbeat, danceable track called “The Big A.C.”
The dynamics on this album are really quite unusual. On first brush it appears like an album full of soul songs made for carefree singing and dancing. However, many of them include far deeper lyrical context than you might expect. As previously mentioned, many of them could sit alongside the classics played on Craig Charles’ excellent radio show. Maybe it’s time that we did have a band who want to send a message, but instead of being down beat, give people a chance to dance at the same time, after all, being socially aware doesn’t mean being boring!