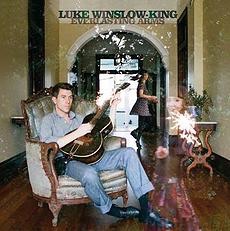 Luke Winslow-King is yet another great artist on the Bloodshot Records label, a label which almost adds a guaranteed level of quality to any release they feature. He’s an emotive artist who as well as being a musician, is also an ambassador for the rich and colourful culture of New Orleans. This album has been described as being like a biography with it’s tales of struggle, risk, misunderstanding and also, thankfully, celebration.
It’s a brave mood to open the album with such an unbelievably laid back track as “Everlasting Arms”, which has a comforting, warm sunny afternoon feel to it. The pace picks up a bit with “Swing That Thing” which has an almost country rockabilly feel to it. That’s a theme and style which continues on “Cadillac Sam” with its faster beat making it one of the more upbeat tracks on the album.

The album has a whole mix of style and influences, as demonstrated by “Levee Man” which has a more rag time blues feel, whilst “La Bega’s Carouse” takes this a bit further and adds an almost Caribbean festival feel to it. Importantly though, it’s not a case of just being different for the sake of it and songs like “The Crystal Water Springs” and “Last Night I dreamed My Birthday” are more straight forward tracks. The first of these is a blue grassed influenced folk song and its strength lies in its toned down simplicity.
On “Wanton Way Of Loving” we get a real chance to fully appreciate the vocals of singing partner (and now wife) Esther Rose. They really shine on this song but also play an important role across the entire album as they give many of the songs a lightness and harmony that really brings them to life. The best song on the album is probably “Domino Sugar”, which has a really cool upbeat and heartfelt vibe. It has a swagger which will just get you swinging along to it. The clever “Travelling myself” closes the album and is a real story teller’s song and with a sound that nicely mimics the noise of an old railway track. You won’t be able to listen to this without picturing someone jumping on an old western train with a sack on their back.

In some ways, it’s amazing how music like this has managed to thrive in today’s modern world of bleeps and instant gratification. However, acts like Luke Winslow-King, Justin Towne Earles and Shovels & Rope etc. are showing that people will always have a desire for this laid back, roots based music. This album is made particularly interesting due to the wide variety of styles and influences that are seamlessly blended together. It ensures that it has a unique quality that allows it to hold its own against any of its contemporaries.