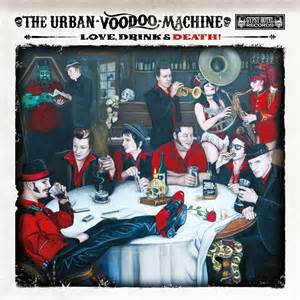 Anyone who has seen The Urban Voodoo Machine live, will know that they are far more than a band. It is more like witnessing a cabaret show and is far more of an ‘event’. This always poses the question whether they will be able to replicate this within the studio. Thankfully their album releases to date haven’t disappointed, but of course that means each release is met with a sense of expectation. Transferring their ability to create a feeling of fun and danger at the same time, is one hell of a challenge.
This album opens up with the relatively straight up rockabilly influenced song “Your Hour Of Darkness”. It’s a sound they also revert to on “Train Wreck Blues” but they also add a touch of country to that song. We get a real sense of the band’s wicked sense of humour with the great “Pipe And Slippers Man”.

After the gentle opening we are thrown a classic Urban Voodoo Machine song with “Crazy Maria”. It contains a whole host of influences to create a song which will have you thinking of a wild gypsy/flamenco number. We get a similar style and feeling with “Not With You”, we certainly can’t wait to see these songs performed live! “Loretta’s Revenge” is another dark, mysterious and broody number which is delivered with a sense of panache and style that only The Urban Voodoo Machine are capable of creating.
If all that’s a bit raucous or dark, we get the more laid back beat of “Don’t Mess With The Hat” which has a jazz feel to it. In contrast, “Drinking My Life Away” and “Shark Waters” show that there are more than enough numbers to drink along to. Although, “Not With You” encapsulates the love, drink and deaths of the album title, all in one song.

We get to see the fun side of the band coming back on a song which has an awesome bossa nova/Latin beat to it and will have you shaking your maracas!! The traditional rock n roll sound also returns with “Hit The Bottle” and is another song to have you drinking and dancing. Whilst “Help Me Jesus” will again see you reaching for that bottle but probably with less than holy thoughts on your mind!
As usual, The Urban Voodoo Machine have done a mighty fine job of bottling their totally unique and intoxicating sound and putting it on record. It’s not an album to intensely listen to on your iPod but instead, it should be played loud and accompanying a party with plenty of tequila or rum. Only then will you fully appreciate the spectacle and dark groove that the band are really all about.