Maybe it’s something in the water but there has been a bit of an upsurge in quality punk rock n roll bands in the UK (see our reviews on Electric River and Magpies & Vagabonds for a couple of examples). You can add the Cumbrian band Colt 45 to that list. They’re a raw punk band who are able to deliver ‘big tunes, big hearts and even bigger riff’ which is a great mix.

They open up the album with “595” which is a great modern commercial rock song, think the Gaslight Anthem but without any of the hang ups! This style keeps going with “O.K.” which has an even more commercial hit feel to it. This is the kind of song that has you hoping that there is some justice in the music industry. If there was, this would get a couple of plays on radio stations and then the Colt 45 would become huge. “When We Sleep Alone” is along the same lines with a really big sound and some great boy/girl lyrics, it’s as catchy as hell!

They manage to keep up this amazing run of quality tracks with “I Thought I Knew Best” where in all honesty they may be risking legal action from the Gaslight Anthem as the opening in particular is so reminiscent of them! Then with “I Remember When The Rain” and “Salt Water” they are clearly trying to develop a more expansive sound. These are the songs that for many, probably more sensitive souls than this reviewer, will be their favourite songs as they are deliberately more complex. For me though it’s the ones that rock out and throw some ‘pop’ in to the mix that really work. They do, however, manage to pull off a more ‘ballad’ type sound on “The Simple Things Are Working” which manages to offer both an emotional pull but also a great big ‘pop’ chorus.

The album manages to hit yet another huge high with “Crutches”. If anyone wishes the Manic Street Preachers had added another bonafide glorious pop rock song to the end of Everything Must Go then this is that track! Once you make the ‘leap’ to that comparison then “Lessons Must Be Learned” will have you thinking it could be a rough bonus track added on to the end of “Gold Against The Soul”

This excellent album ends with “Found My Home” which certainly begins as a straight forward pop rock song. They do, however, throw in a funky guitar riff and a mid-section which suggests a Clash influence, which can never be a bad thing!

This can be added to the list of brilliant debuts that will have you instantly loving a band. Interestingly, there are now a few bands like The Road Home, Magpies & Vagabonds, who are demonstrating an influence from the likes of The Gaslight Anthem. They have picked up that blueprint of a blue collar music style which has a mix of rock, punk and importantly commerciality. That’s not using ‘commercial’ as a dirty word. It doesn’t mean ‘selling out’ or having no substance, but is just a recognition that a good melody can take a song from being good to being brilliant. The result for Colt 45 is that this is definitely on the list for potential album of the year. 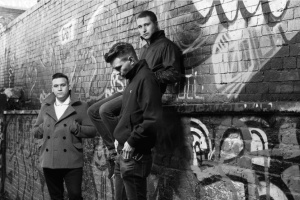 One response to “Colt 45 “The Tide Is Turning””