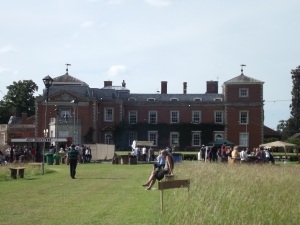 It is always nice to welcome a new festival to the scene, and in particular one like Red Rooster which promised something different, with it’s American South inspired theme. Even before you got to the music itself, you couldn’t help but be impressed by the fantastic venue. It was set in the glorious grounds of Euston Hall and offered an idyllic camping venue in itself. Credit must also go to the staff at the festival, who also contributed to a great atmosphere. This ranged from the friendly guy in the car park, upbeat bar staff, laid back security presence and litter collectors who even came up to you to ask if you’ve finished with your can so they can dispose of it!!
The Friday evening provided a gentle introduction to the event, with a variety of acts performing on the smaller, acoustic stage and in the main tent. The headliners on the main stage were CC Smugglers, who attracted a decent and enthusiastic crowd. They had a bit of a ramshackle look, verging on kinda cool, kinda not! They were an appropriate band for the festival, as they did have a swing, bluegrass, almost hillbilly feel to them. The lead singer could perhaps do with working on his presence, but to be fair this may have been just a case of trying too hard. He was a tad over the top, although he did play some great harmonica. They played some good blues based songs and the trumpet/keyboard player was particularly impressive. They finished Friday’s live music session off in fine style, with a great final song performed from the centre of the crowd.
Friday night’s entertainment did not finish there, as there was also an after-hours disco put on. It has to be said that this was something of a surreal experience. The music did seem at odds with the theme of the festival, as it was a lot of northern soul with a few classics thrown in. That’s not to say it wasn’t great though! Sure, it was helped by the splendid cocktails available at the bar, but the atmosphere it created was brilliant, with all present having a fantastic time. The whole place was just full of people who seemed determined to enjoy the festival as much as possible.

The downpours that greeted Saturday morning were therefore probably missed by most, as they took the opportunity to sleep off the previous night’s excesses in their tent. By the time the festival was back in full swing, the sun was out and we had glorious weather for the rest of the day. The Saturday a.m. did demonstrate one of the few short comings of the festival, which was the catering facilities. Admittedly, they suffered due to the rain causing issues but the one hot food venue attracted criticism all weekend. It still managed to have long queues but only because it was the only source of anything hot to heat. Given how wonderful everything else was, I am sure that this is something the organisers will sort out for next year.

Some really great acts had been booked for the Saturday so there was much to look forward to. The first band we saw were the Dirty Strangers who were very clearly an experienced group of really good musicians. Admittedly, they looked as old as the Rolling Stones, but they also sounded as good as them as well. It was a great blues rock based set, delivered by the frontman who had a great sense of coolness about him and a drummer who looked like John Densmore. They delivered a set of upbeat rocking numbers like “Bad Girls” which really got the atmosphere going. They were followed by the hugely entertaining The Vagaband, who were an eight piece, multi instrumental group. They brought a more bluegrass feel with an added vaudeville twist. They attracted a good and enthusiastic crowd which seemed to include quite a few actual fans of the band, along with many interested passing punters. There can’t be many better ways to spend a weekend than with a beer and listening to a band singing a song about tripping on cheese! They did a great version of Johnny Cash’s “Orange Blossom Special”, which also saw a funny mid-section where each member of the band had to use their instrument to do an impression of a choo choo train! The whole set was really great.

Miraculous Mule were something quite different, and indeed had more of a kick with their straight up rocking sound. It was a harder sound, which probably leant more to the style of the festival headliners, Jim Jones Revue. Although a three piece, the lead vocals were shared by both the guitarist and the bassist and both were equally as impressive. Some of the songs almost had a Black Keys feel to them with their swampy blues sound.
Away from the main tent, the smaller acoustic stage also provided a great little venue where you could sit on a hay bale and enjoy the sun, whilst hearing some great music. Focusing on smaller acts with lots of acoustic style music playing, it helped to keep the relaxed and cool atmosphere of the festival going. This was demonstrated by Will Udall, who brought the Perth sunshine, along with his acoustic strumming, to create a perfect sunny afternoon feel. 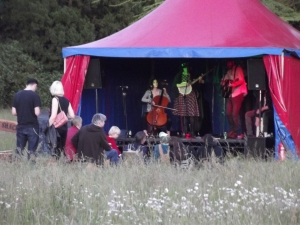 It was quite clear from the T shirts around, that many of the people there were fans of The Urban Voodoo Machine. This is no surprise given what a fantastic and unique band they are. In fact, to call them a band is a bit of an understatement, as they are almost like some kind of cabaret/theatre act which incorporates all that is good and wild about rock n roll. Two drummers is unusual enough, but when one is a huge man that is painted green, we are not talking your run of the mill band! Their performance and tribal drumming style really got the crowd going. The set included many of their great songs such as ‘Love song 666’ which really got the audience buzzing. The whole thing just played out like a soundtrack to a Tarantino film. The band were just perfect for the venue, although it could perhaps have done with being performed in the dark to match the voodoo feel. The set ended with a fire eater on the stage and the band left the crowd begging for more, it would’ve been great if they could have had a longer set.

The unenviable job of following The Urban Voodoo Machine fell to Peter Molinari. It was quite a change where Peter had a look which was like a mixture of Prince, Beck and Dylan (or maybe that was just when he used the harmonica!) and then the drummer looked like he was Owen Wilsons’ kid brother. The songs were also more in the vein of a power pop style. Some of the songs had a neat Beatles esque feel to them, and certainly the higher tempo ones were more in keeping with the feel of the festival. The whole set was pleasant rather than exciting, but again that probably had a lot to do with the stage times. Whilst a decent band there was just a feeling that they could have done with letting their guitars hang a bit lower and giving a more loose, rock n roll feel.

When it comes to playing loose and fast rock n roll, then there is probably no better band around at the moment than The Jim Jones Revue. Indeed, they were introduced as the best rock n roll band in the world, and on this showing there will be few who would argue. They played an absolutely blistering set including loads of crowd favourites such as ‘Savage’ and ‘Dishonest John’. All the songs were played with complete venom and commitment, to create a truly special atmosphere in the tent, which became quite an intimate venue. The whole band just exudes coolness and attitude. There was little need for long between song interludes, as the band just went from one great tune to the next. Shortly before the festival, it was announced that the band are to split up after their current tour commitments, which is a huge shame. Whatever the reason for this, the band certainly seem intent on going out with a bang if this performance is anything to go by. They certainly seemed to enjoy it and after a brief encore that left the crowd with the promise of joining them for a drink afterwards.
The Jim Jones Revue set, being short, sharp and brilliant therefore brought the festival to an appropriate end, as the whole event shared the same features. The fantastic weather was, of course, a contributing factor but the whole event just had a really great atmosphere. Everyone seemed intent on just having a great time. Being smaller than many festivals, it had more of a family atmosphere and a more generally relaxed vibe. One thing that is for sure is that you can guarantee that those in attendance will definitely be looking to come back again in 2015, which is surely the most important sign of success.