Matty James – “Last One To Die” 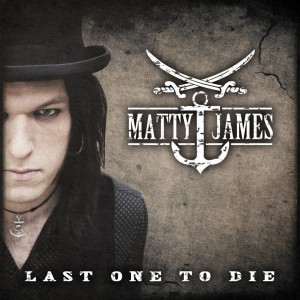 Matty James is what you might call a proper rock n roll troubadour or alternatively a guitar slinger. He has already released a couple of EPs but “Last One To Die” is his debut full length album. Whilst he has released a live album, it is always a big test to step up and deliver that first album release.
The first song, “Leaving”, surprisingly opens with an almost country sound but we’re not talking Jim Reeves, instead this has a darker feel like a modern Johnny Cash type song. This is followed by the first single from the album which is called “Up In Smoke”. It is a great choice of single, as it picks up the pace to deliver a brilliant rock n roll song. Matty keeps it simple with a song that is full of swagger and is a really great song. Another contender for a future single must surely be “Same Old Me (Brand New You)”. It’s another great rocking number which will bring to mind some brilliant British bands from the past like The Dogs D’ Amour, Quireboys and Cry Babies.
In contrast, “Don’t Turn Your Light Out On Me” is a slower song, delivering a feel of heartache and pain. The comparisons to the solo work of Tyla from The Dogs D’Amour are certainly valid on this and the following track, “Never Lean”. That one has a slower, storytelling feel to the lyrics. It therefore comes as no surprise to see the great man himself appear as a guest vocalist on “Last One To Die”. Given the similarity in styles this is quite a compliment and rubber stamps the quality of the music on this album.

“Better Days” is another song that takes the singer/songwriter style but adds a bit more melody and passion to give it an extra kick. It has the feel of a real crowd pleaser. “Another Night” has a slower, more country waltz feel to it. This is the song to accompany that late night, lonesome bottle of wine or whisky. You will also need to keep that warm red or whisky shot to hand for the final track on the album, “This one’s for …”.
Anyone who has checked out Matty’s recent live release will be waiting with major anticipation for this full album. Thankfully, they will not be disappointed. It’s a fantastic album which in the current music scene is actually very unique. We could certainly do with some more British artists who have the sense of being a genuine rock n roller like Matty clearly has in spades. The album will be released on the 2nd June and pre orders are available at:
Pre order CD from Amazon: http://www.amazon.co.uk/Last-One-Die-Matty-James/dp/B00K0O63U2/ref=sr_1_1?s=music&ie=UTF8&qid=1398959275&sr=1-1&keywords=matty+james+last+one
Pre-order Digital Download from iTunes: https://itunes.apple.com/gb/artist/matty-james/id852469511
So make sure you get yours on order now!

One response to “Matty James – “Last One To Die” album review”