Mike Mains & The Branches – “Calm Down, Everything is Fine” 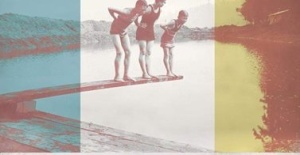 Mike Mains & The Branches were formed in Texas but flourished as an indie rock collective in Michigan. Having released a debut album called “Home”, they are now back with a release which it would appear hasn’t been without it’s challenges. This ranged from getting their van and gear stolen, re recording and the coming and going of a few band members. It is therefore interesting to see how the band have faced these issues and whether they have over come them with this release.

Things begin quietly and slowly with ” Played It Safe” but soon the drums start picking up the pace and ends in a crescendo of noise. The album then seems to properly kick of with “Everything’s Gonna Be Alright”. It’s a classic pop/rock type song that actually has a sound reminiscent to the band Fake Problems at their ‘pop’ best. It’s melodic and wants to make you sing and clap along, which has to be a good sign. Thankfully, it is not the only one, “Take It All” is another huge song with a great melodic chorus that you wont be able to resist trying to sing a long to and is surely a live favourite.

“By My Side” adds a more anthemic sound which actually has that big and bright sound that the Killers seem to have nailed so well. “In The Night” is very similar where the key boards and ‘ooh ooh’ backing vocals give it a real commercial pop/rock feel and are joined by a great guitar line. This song has got radio hit all over it and it even throws in a Springsteen reference for good measure. They keep it all going with “Burn”,but that also shows a return of the more punky/feedback influence sound.

The first single off the album is “Noises” which actually has a more ‘angular’ feel to it. The underlying melody appears to be fighting it’s way to the fore ahead of the crunching guitar. The song “Slow Down” is a ‘does what it says on the tin’ track. It’s a gentle, acoustic number which provides a nice break in the album. As the song suggests, it’s the one to slow down and have a coffee to. Later on, the band do let up the pace again on “Where Love Dies In”. It’s a more epic and heartfelt song, where the stark and cold sound and passionate vocals give a real feeling of heartbreak.

Title track “Calm Down, Everything is Fine” also lives up to it’s title at first. It seems to provide a slow and gentle end to the album. That is except for the mid song blasts of feedback. It then ends in a sing a long refrain which will again get you joining in.

The ability to write smart, pop/rock songs, which are both commercial but also authentic is a tricky one. Mike Mains & The Branches have made it seem easy on this album though. Many of the songs on here could easily be picked up on commercial radio but they retain a punk ethic and an indie feel. It can only be hoped this will allow them to appeal to fans of both genres. Bands like The Killers have shown that this can lead to huge success and it would certainly be great if this brilliant album could get even a little of that level of exposure.